What better time to revisit the desert heat than in the middle of winter.

K, M and I took a road trip with K’s co-worker E (that’s a lot of letters), around Arizona, Utah and Nevada, packing as much as we could into our three day weekend.  Utah and Nevada will come up in the next, and last, post of this American series.  When M had finished work, we picked him up and drove due east, through the Mojave Desert to Arizona with the sun setting behind us.  The drive took about 8 hours, and during the night I would doze off in the back seat and then wake up, seeing only the cats eyes lit up on the road in front of us, reflecting back our headlights.  It wasn’t until a few months later that I watched David Lynch’s Lost Highway and I was brought right back.  By the end of the trip, the others were sick of me saying it, but I couldn’t get over how straight so many of the roads were.  On maps you can see that the roads do curve slightly, but it was strange to drive for hours in the dark without ever feeling the car turn.

We stayed at a place not too far from the Grand Canyon National Park and right across the road from another attraction that I’ll talk more about later.  The best time to hike at the Grand Canyon is in the early morning before the sun gets too high, but we all, and especially E who drove, were tired so it was about 10 a.m. by the time we were ready to start our hike.  We took the Bright Angel trail which is the easiest of them and we hiked for about 3 miles down into the canyon.  We weren’t planning on hiking all the way down to the bottom where the river is because it would take longer than a day to hike there and back. 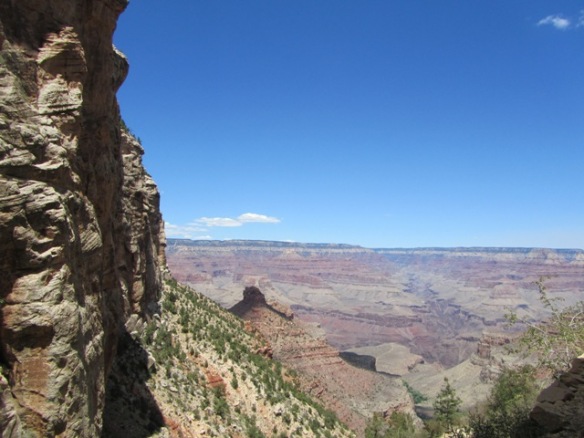 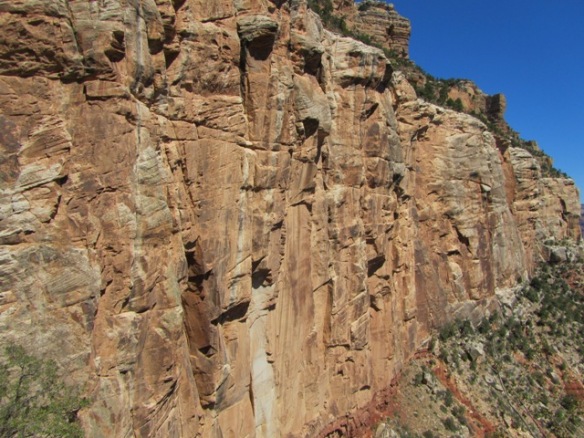 It was the opposite of climbing a mountain.  It was relatively cool at the top, getting hotter as we went down, and the easy part of the climb was at the beginning.  In fact when we reached the 3 mile station, we were tempted to go farther to the oasis at 5 miles, but we made the sensible decision and started back up from 3.  That’s when it got tough.  I hate going uphill.  The great thing about going down is that you can see the canyon expand before you, while with going uphill, you are looking down at the path, putting one foot in front of the other, while feeling the oppression of the massive canyon walls rise up above you.  At least, that’s how I felt. 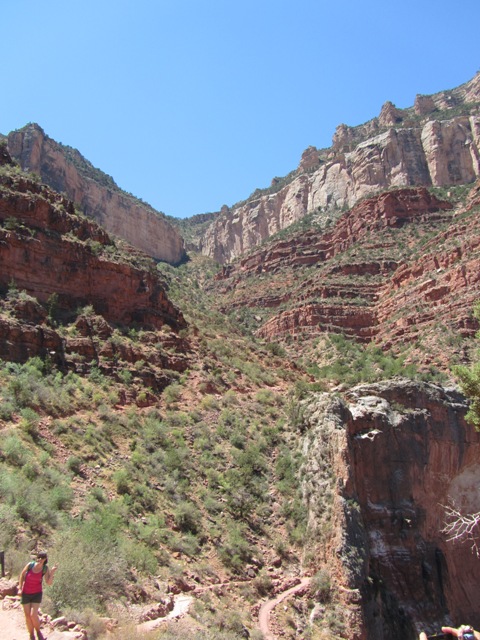 We saw some wildlife too, not only squirrels but a ram!  We had stopped for a drink and then we saw this beast come up the path.  He stopped when he saw all the hikers, and then bounded almost vertically up the canyon wall. 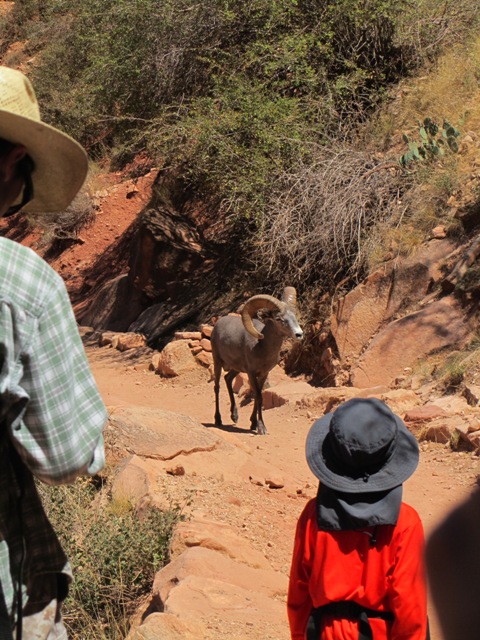 We took a shuttle bus after the hike to see some more views.  I’m glad we hiked down to get some idea of the depth of the canyon, because, just like in pictures, in real life the Canyon is just too big to comprehend.  It looks like a painted background. 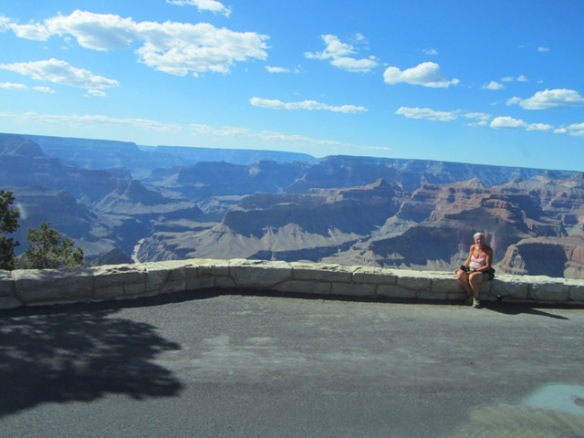 We were invigorated after our day’s exercise and when we got back to the Inn, we went across the road to visit Bedrock City; a Flintstones themepark that should be abandoned but isn’t.  It was fun and creepy. 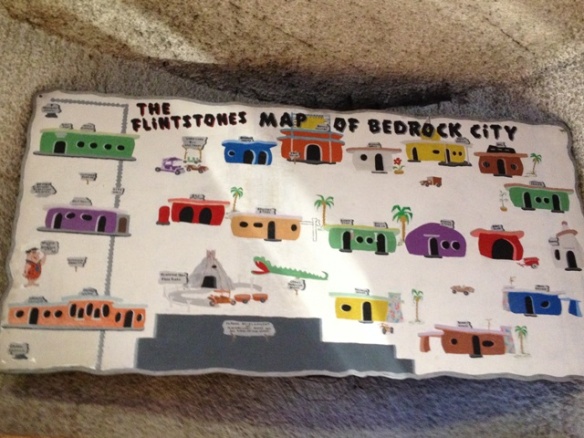 This hut had a goat(asaurus) in it.

The highlight was when the guy who worked at the diner came out to drive us on a mini train in a small circle through a plaster mountain while we shouted yabba-dabba-doo.  Click on the picture below for a better view of the panorama.

We saw the sun set over the themepark that spilled out onto the desert and then headed back to sleep. 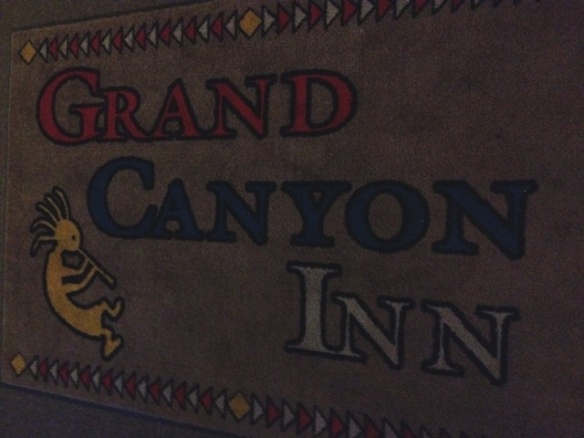 We were on the road again by 4 a.m. to get to our next destination in Utah in the morning.  It was the time of the year for the Perseid meteor shower, and although I didn’t see any shooting stars, the stars were amazing as we started our drive.  We drove through the Grand Canyon National Park, and maybe the most stunning image I have in my head from my trip is seeing the sun rise over the canyon as we drive through the desert.  As I mentioned above about the straight roads, it was really strange to be driving on roads that you could see stretch way out in front and back through a vast landscape without seeing any other cars or buildings.

I was so busy being awed by nature that it took me a while to notice that we were running low on gas, but we all let out a collective sigh of relief when we entered the Navajo Nation and there was a lonely gas station waiting for us. 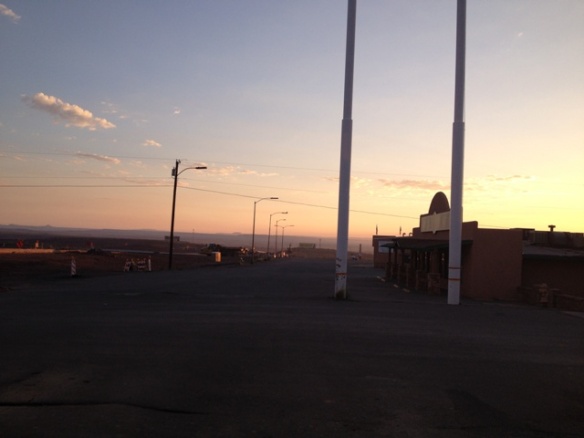 Our next thought was breakfast and we followed our maps to Denny’s, a cheapo chain diner in the US.  I felt the strangeness of eating in a place like this, in the middle of a desert, along with Native Americans.

We drove on, crossing the Colorado River, which carved the Grand Canyon way way back, and continued driving through the flat desert bordered by massive plateaus of stratified red rock, and on to Utah. 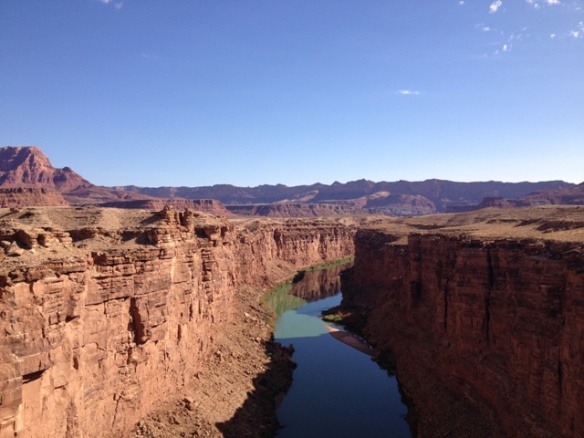