Last month there was a national holiday on a Friday so I took a trip to Tokyo, having been persuaded by my friend Eoin to come to the Electraglide festival that was happening in Tokyo on the Friday night. It was also going to be in Osaka on the Saturday night but even though it`s a longer distance to travel, I prefer Tokyo. I wasn`t too familiar with the acts performing at the festival, having heard their names – Four Tet, Squarepusher, Flying Lotus – but hadn`t heard much of their music (there goes my credibility). It sounded like a good time though so I was up for it. I took the night bus on the Thursday night which was more expensive and full than usual because of the long weekend, but I slept fine.

The above image isn`t from the event, however, as having the whole day ahead of us, Eoin and I went to a few exhibitions. The first one in the Tokyo Museum of Contemporary Art was relevant to our musical experiences later that night; Art & Music – Search for New Synaesthesia. The general advisor to the exhibition was the composer Ryuichi Sakamoto and the exhibition showed artists` exploration of the connection between art and music. There were visual representations of music and sound, like the paintings by Klee and Kandinsky, and there were auditory representations of images and objects, such as Bartholomaus Traubeck`s Years (below) and Christine Odlund`s Stress Call of the Stinging Nettle (featured image of this post). I really liked those two works in particular. In Years, a section of a tree trunk is played on a modified record player and its grooves are monitored by a computer chip on a needle and converted to piano notes. You could listen to the audio track as the record spun. I don`t know what system the artist used to convert the texture to music notes but the result was surprisingly beautiful and melancholy. As the circumference of the needle’s path became smaller, the piano notes became more frantic and dissonant. There was a similar work by Lyota Yagi called Vinyl where a record was made of ice and played until it melted. That was harder to listen to though, because as it melted the music became clouded with white noise like a radio station with bad reception, which you can only stand for so long. 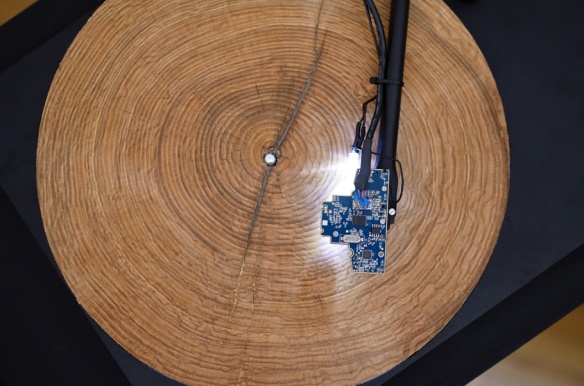 In Stress Call of the Stinging Nettle the artist had drawn a textbook-style image of a nettle releasing chemical compounds when it is under attack. The long image was looped and read like a pianola score, and each graphic of a chemical would add a new sound. This work made me appreciate what the artist was trying to do, because at first I thought it was a little silly to convert chemicals into sound because the artist is applying their own arbitrary rules as to how they should be converted to create a work that`s ultimately only the artist`s imagination and has nothing to do with chemical processes (the same can be said about a lot of visual conceptual/abstract art, and i think some of that is silly too). Yet watching as the image influenced the sounds, I realised that these chemical processes aren`t visual either but that`s just one way we can learn about and understand things we can’t easily experience, so I appreciated that the musical interpretation helped me to understand the way that these processes happen – their patterns, depth and relationships – in a new way. I think we`re able to reason with and interpret strange visuals better than we do with sounds, which requires more effort on our part.

There was also a screened performance of John Cage`s 4’33”, which is four minutes and thirty-three seconds of observing the people you are experiencing it with. Luckily for me there were two cute little Japanese kids to be distracted by.

Tiredness was setting in but we powered on.  We went to the National Film Center to see the exhibition Nikkatsu 100: A Century of Japanese Cinema, which charts the history of Japan`s oldest major film studio.  The exhibition was small but full of fascinating artefacts, photographs, film clips and posters.  They had examples of the first kind of cameras that were used in Japan, early recordings of Kabuki and Noh performances and photographs of the first Japanese film stars.  It showed the development of the studio right up to the present day but unfortunately we had to rush through the last sections because we had to meet people.  I could have stayed there for hours, and I especially loved a looped video of Meiji era clips of Japan, from people walking down a Tokyo street, to Ainu dances in Hokkaido. 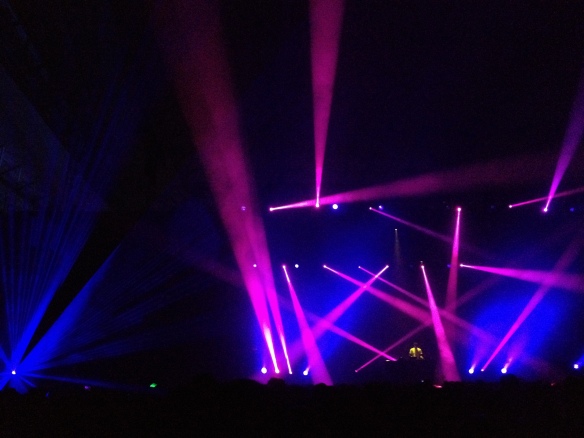 After meeting up with various other folk, we went to the Makuhari Messe which is actually in Chiba, the next prefecture over.  It`s the second largest convention centre in Japan and it was a massive warehouse that could fit two large stages with space in between very comfortably, with thousands of people milling about.  The acts were great and everything tied in with what I`d seen in the exhibition earlier, especially with Flying Lotus` stunning holographic visuals.  It was a pretty synaesthetic experience. 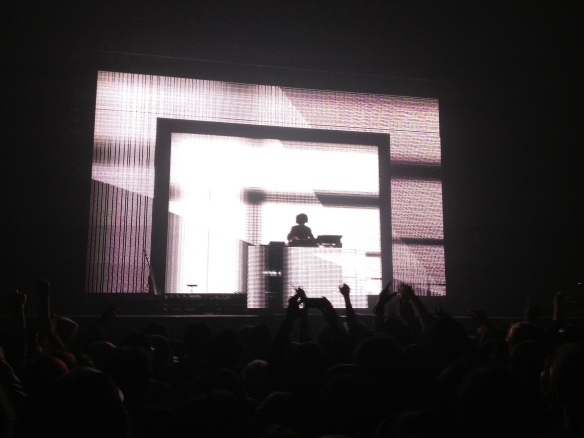