The island trip I mentioned in my previous posts was to Hashima, also known as Gunkanjima or ‘Battleship Island’ because of its appearance. It’s an abandoned mining town that at the height of its production in the late 1950s was home to 5,259 people on an area of 6.3 hectares.  This would work out to a population density of 83,500 people/km2, compared to 6,000/km2. in the present day city of Tokyo.  It’s only recently become accessible by boat tour, as in 2009 they built a new dock on the island to allow visitors to walk around the parts of the island that have been secured. All the tours for the weekend were full when I went to make a reservation, so we skipped our plan for Huis ten Bosch in order to visit the island on the Friday, and I’m so glad we did because it was the last day of good weather on our holiday, and a really interesting trip.

Sailing out of Nagasaki harbour was a good way to see the Mitsubishi shipyards that are still in use. The size of the cranes to build the cruiseships was quite astounding. 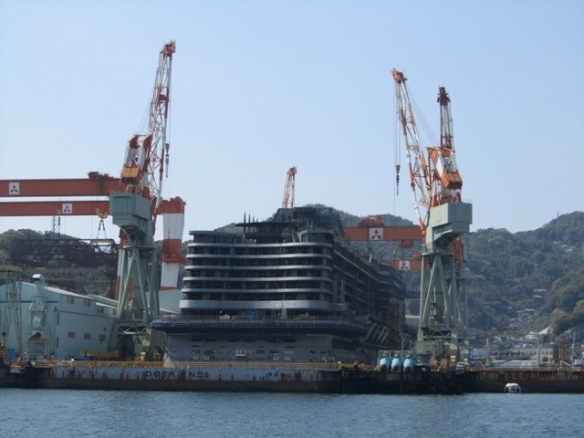 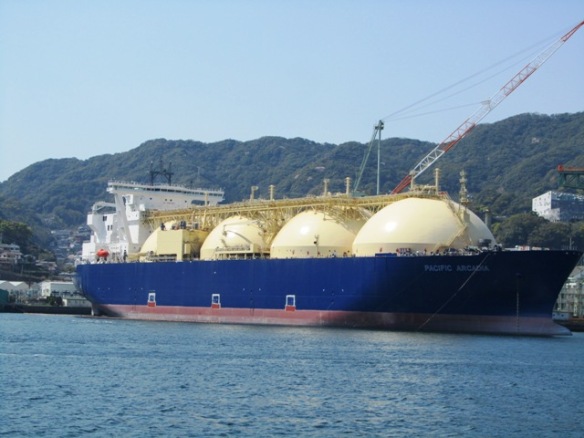 Our guide told us that the size of the Mitsubishi symbol on the cranes above was the same as four tennis courts. 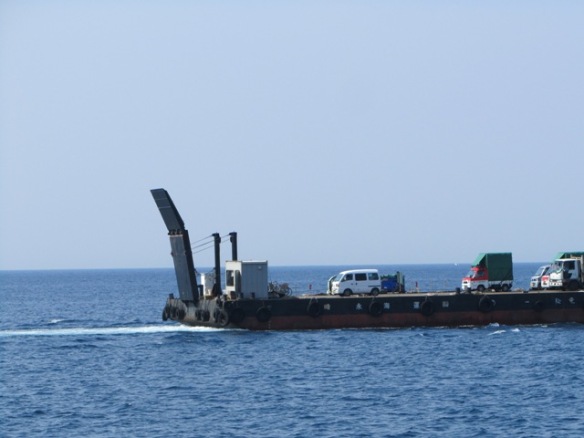 The island sits on top of a coal deposit, and in 1890 Mitsubishi bought it and dug mines there.  It developed rapidly along with the industrialization of Japan and it was very important during the war and after, as Japan has very few energy resources.  More land was reclaimed from the sea, the mines were expanded and a town built.  Life on the island was a mixture of hardship and danger working in the mines, and modern conveniences and luxuries unknown to most families on the mainland in the residential area.  Wages were good, housing and utilities costs were negligible, and by the end of the fifties, many households had televisions and fridges.  As well as the residential buildings, there was a hospital, a school, public baths, a gym, a cinema, a pachinko (pinball) parlour, restaurants, shops, a Buddhist temple and a Shinto shrine.

Life in the mines was not so pleasant however, and fatalities were frequent, even more so for the non-Japanese residents.  As Imperial Japan was expanding across Asia and sending its young Japanese men off to fight in the army, Chinese and Korean men were brought to the island as forced labour to keep up coal production for the war effort.  They lived in separate buildings at the edge of the island, crammed into tiny rooms, and they had to do the most dangerous work in the mines.  The Japanese government has proposed Gunkanjima as a World Heritage Site to UNESCO as part of a larger region of Meji-era industrial sites in Kyushu and Yamaguchi, however this proposal is contested by South Korea because of its use of forced labour.

In the sixties, Japan moved from coal to oil in order to power its economic boom, and that led to the decline of Hashima.  The island’s last residents moved out in 1974 and it remained inaccessible until 2009.  It’s sometimes known as ‘ghost island’ because some people left so abruptly that they left many of their belongings, so it looks as though people just disappeared from the island one day, and then it began to decay.

An interview with a former Japanese resident can be read here along with some cool photos of the decaying interiors, and this article has more information about the history of the island. Much of the residential area remains on the northern part of the island, but the industrial area was on the exposed southern side and little remains after years of typhoons.  The tour path is on this side, away from the buildings. Image from Wikipedia. 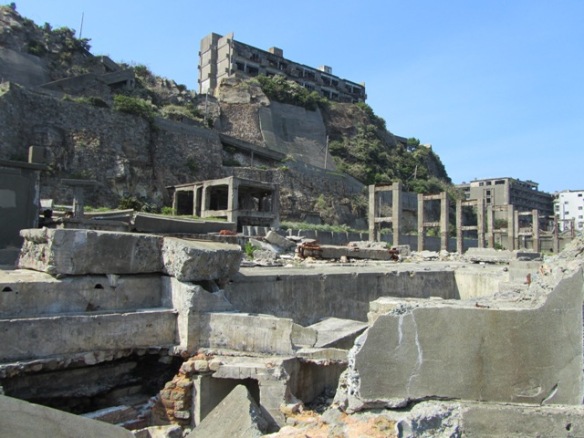 Those concrete arches supported the coal conveyer belt, bringing coal from the mine to a storage facility. 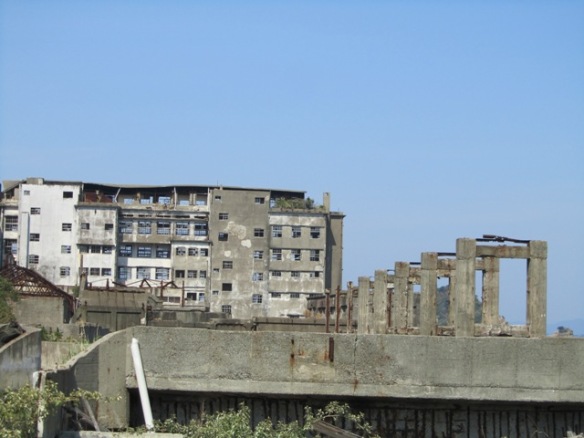 The building in the background is the school.

When Hashima was in use, it didn’t need a lighthouse because there were always electric lights on no matter what time of night as the miners changed shifts.  Since it’s been abandoned, a lighthouse has been installed.,

The steps seen here led to the entrance of the second mineshaft.

This brick building was the General Office which controlled the mining activity.  There was also a communal bath here for the miners, who would come out of the mine pitch black.

This is the school seen from the sea. 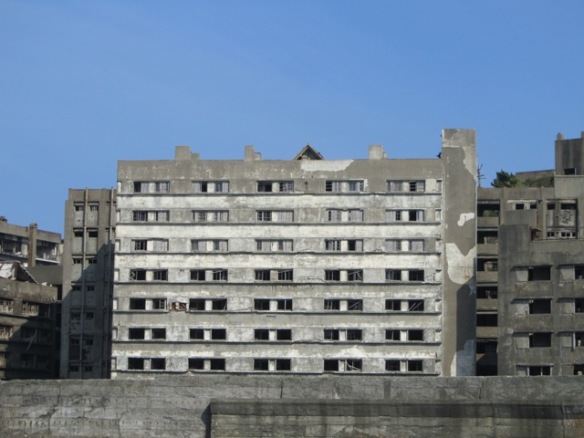 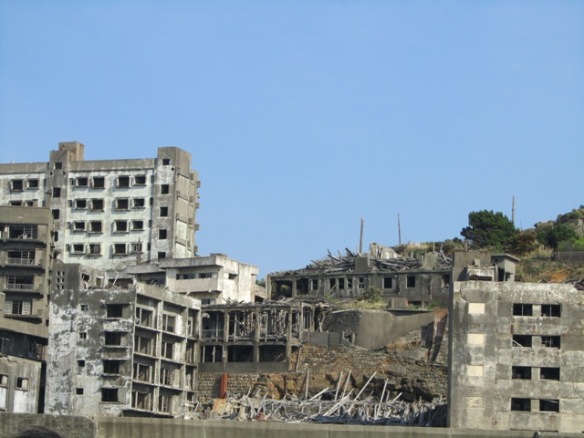 The wooden construction on stilts above the buildings is the shrine.

Islands in the distance. 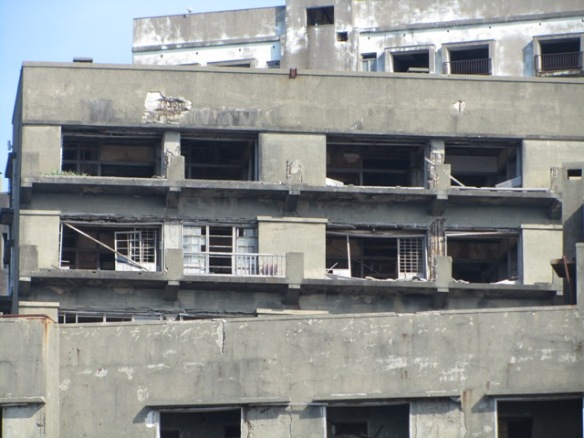