The Japanese school year goes from April to March so our final year students had their graduation on the 1st of March.  I had already been to last year`s ceremony so I knew what to expect, and more importantly, how to prepare for it. I didn`t have to do anything except sit in a freezing cold gym hall for an hour and a half so I made sure to wear lots of layers under my formal clothes and to distribute heat packs (kairo) about my person. I got a seat close to the heaters, which had been updated from the ancient kerosene ones from last year, because we`re preparing to move into a new school building so we`re getting lots of new things. 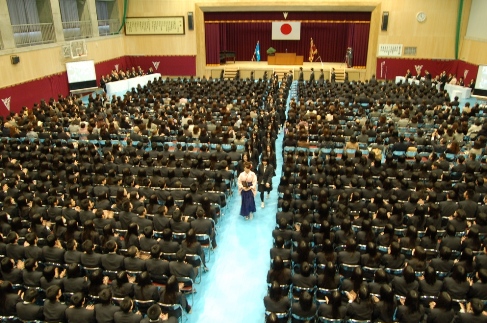 The teachers sat at the back to the side, the first- and second-year students sat at the back, the parents sat in the middle and the graduants sat at the front. There was a stage at the top of the room with the Japanese flag and a podium. The ceremony started at 10 o`clock when the principal, vice-principal and the school board came in and sat at the top of the room, principals to one side, board members to the other. Then the third-year students came in, led by their home-room teacher, to the top of the room to sit, while everyone clapped. The students were all in their uniforms, the teachers and parents were all dressed in suits or formal wear, some of the ladies of the board wore elegant kimono and the female home-room teachers wore kimono with hakama, a kind of apron-skirt that is traditionally associated with graduation. Girls graduating from university will usually wear that outfit. My favourite outfit was the principal`s though, who was in full morning dress with a morning coat, necktie, waistcoat, grey striped formal trousers, and white gloves. Male members of the cabinet of Japan also wear morning dress in their first public appearance following the formation of the cabinet. 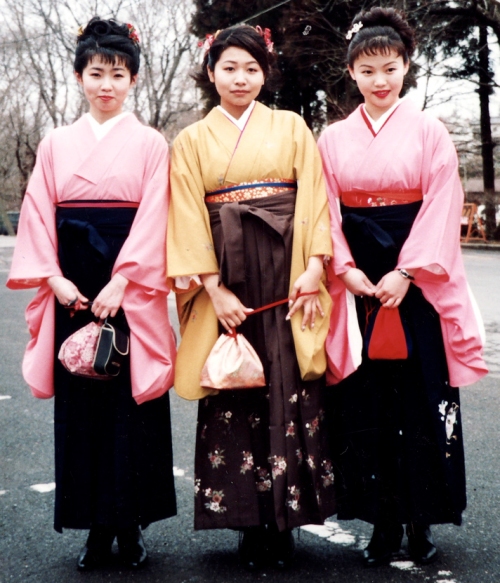 The ceremony was opened with everyone standing to sing the national anthem. There was a lot of standing up, bowing and sitting down, and the mc would call out who out had to stand up – everyone, all the students, only the graduants etc. It felt like being at Mass. After the anthem, the names of each student in a graduating class was called out, they stood up and at the end, one of the students went up, bowed to the principals and home-room teachers on the right, the school board on the left and then went up on the stage to be presented with the class certificates by the principal and bow again. Then there were speeches given by the principal, and by some of the students who were fighting back tears. One of the students sitting near me fainted and had to be piggy-backed out of the hall by a teacher. Apparently two other students fainted during the ceremony as well (from coldness, I think). At the end we sang the school`s anthem and the graduating classes called out a thank-you to the crowd before leaving the hall, led by their home-room teacher.