I had recently been feeling the urge to get out of the city and get into nature, because the leaves were changing colour and I was reminded that it won`t be long til the cold, dark and snowy winter will make countryside travelling very difficult. Two weeks ago I went up to the Noto peninsula in Ishikawa. It was a beautiful day for a barbeque and we went to the woods on a hill overlooking the bay. The Noto peninsula is beautiful, rural Japan, but so far I haven`t seen much of it as the trains only go half way and buses are infrequent. Some day though, I`ll make it to the end.

Last weekend I travelled to the neighbouring prefecture of Toyama on Ishikawa`s north-eastern side. Toyama is home to Tateyama, the third Holy Mountain, and to the Tateyama-Kurobe Alpine trail where you can cross the Northern Japan Alps from Toyama into Nagano. I might do the trail in Spring because when the trail opens, the snow on the side of the roads can be as high as 20 meters, making the famous snow corridor. But this time I wasn`t going to look at snow, I wanted to see the Autumn leaves. I was going to Toyama anyway that weekend to go to a Halloween party so I did some research to see what sights could be seen while I was there. Kurobe Gorge is close to the Tateyama-Kurobe Alpine route but it`s accessed from a different direction and doesn`t link up. The gorge is the deepest in Japan (although it`s not exactly a ravine) and wasn`t a popular spot to visit until after the construction of the Kurobe Dam when the railway, originally used to help with construction, became used for a sightseeing train.

This was exactly what I wanted to do, so on Saturday morning I got the train from Kanazawa to Toyama City where I met my friend Katie, and on to Uozu where we changed to the Toyama Chiho Railway at Shin-Uozu on to Unazuki-Onsen, from where the sightseeing train starts.

I learned three things on that day: wear a coat when going through mountain tunnels, don`t wear tights to places there are foot onsens, and don`t assume that cans of coffee from a vending machine will always be hot now that the seasons have changed.

We were the only foreigners there that day, although there were a lot of Japanese tourists, and I wonder how often foreigners go there. No English was spoken to us, but the train conductors were very concerned about us missing the last train back and making sure that we understood the timetable. Bless them.

The trains were long and orange with open-sided cars. Before we started off I was worried that this was going to be like a chronically unsafe rollercoaster, skirting around the sides of cliffs with nothing between us and the gorge but a loose chain at the side of the carriage. But it wasn`t terrifying at all as the train rumbled along at a leisurely pace and the tracks were wide. 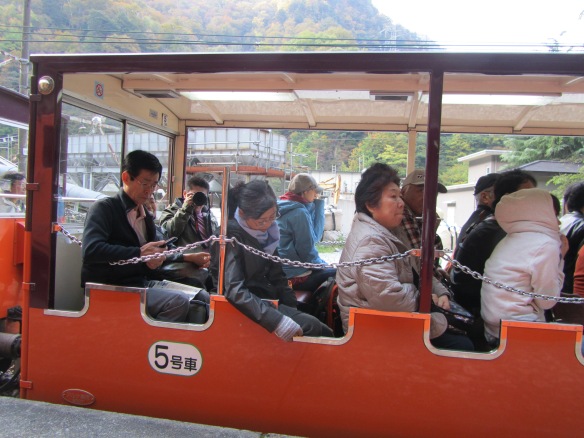 I don`t know why there was a Norman castle at the edge of the reservoir.

We stopped at two places on our journey. At Kanetsuri we saw the mannen yuki or `ten-thousand year` snow, which was looking very sad at this stage in the year and an open riverside hot spring where people could stick their feet in.

They`re not that common but they do exist – beer vending machines.

At Keyakidaira we were quite chilly from our journey through the mountains so we went to an onsen (hot spring) to warm up. It was a pretty basic affair; we gave 700 yen to a lady running a ryokan (traditional Japanese guesthouse) to use her outdoor onsen which was a small pool at the side of a cliff facing onto the Kurobe River, covered with tarpaulin to shield it from passerby`s eyes. The water was absolutely scalding but after a while a woman came in to check and added some cold water to the mix. The view from the onsen was great, with yellow and red forested mountains around and a rushing river below. 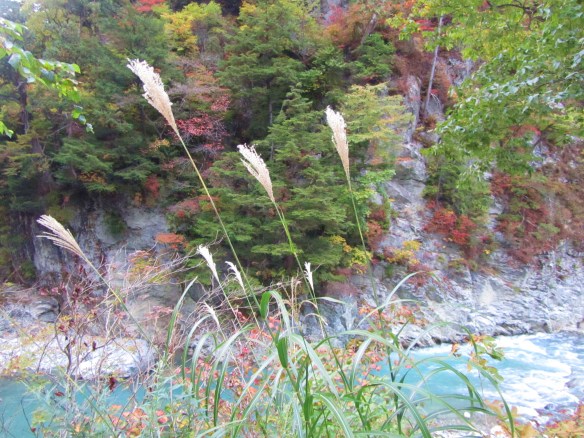 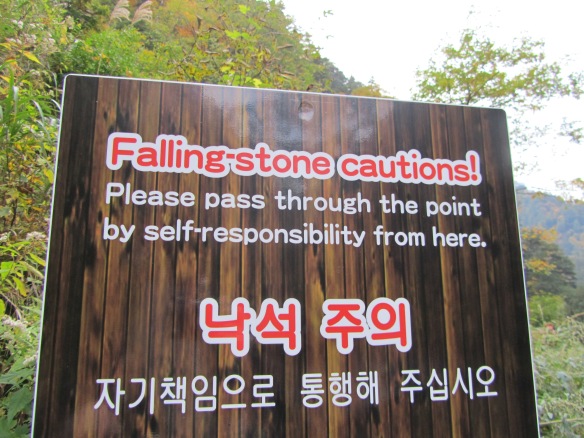 The sun had set by the time we boarded the train back to Unazuki-onsen so while our carriage was flooded with light, the outside was dark except for the occasional lights of the few stations. As our train trundled along, it reminded me of Spirited Away.