I went to Osaka a few weeks ago for my friend Catherine`s birthday. It was my first time to the city, apart from a brief change of trains at Shin-Osaka on my way to and from Hiroshima with my family in April. I was curious to see what it would be like as it seems to be an `either love it or hate it` city. I got the train down on Saturday morning and got a local train straight to the port where the acquarium is, as Catherine and I were going to meet there. The train was on an elevated track and it felt like I was in a futuristic film, travelling across Osaka passing high-rise buildings and other elevated roads and tracks.

I haven`t seen that much of Tokyo and I only saw Osaka briefly, but my impression is that is has a more run-down and derelict feel to it. There are plots of empty land next to empty buildings which you just wouldn`t see in Tokyo. And it just felt more dodgy, like I was back in Dublin, with strange people walking around talking to themselves, drunks asleep on the path during the day and working class families with five kids, all of whom have dyed-blonde mullets and earrings. It didn`t feel dangerous, just the most dodgy that I`ve felt in Japan, where social problems tend to be less obvious than in other countries. Maybe it was just the areas that I saw, as I did stay in a very cheap and cheerful hostel – cheap due to its location and prison-like rooms, but cheerful due to the helpful staff and friendly guests staying there.

Catherine wanted to go out in Osaka as it was a good meeting point for us Irish JETs around the Kansai area, and because she wanted to compare the nightlife with Tokyo, where she has been out a good bit, and there is famous rivalry between the two cities. We were also curious to see what had happened to it since the `dancing ban`. I didn`t believe this when I first heard it, but it`s true. Most venues in Japan only have licenses that allow late-night drinking but another license is required for late-night dancing. But, in order to get this second license, a venue must have an area of at least 66 squared feet, which most independent clubs don`t have due to the high price of rent in the cities. This law was brought in in the post-war era to control hostess bars and strip clubs, which would have been in small venues, while allowing people to dance in the larger-sized ballrooms. This law was never revoked and recently it`s been reenforced, apparently to crack down on drugs, rowdy behaviour and underage drinking, none of which comes close to rivalling the scale of those problems in Dublin or other places. So while it is still possible to go out dancing in the larger clubs, a lot of the best places in Osaka have closed down or won`t allow dancing. A friend of mine said that one night people were dancing in a club and a member of staff held up a sign saying `no dancing`. The police have also been enforcing this. Read more about it here.

Our night wasn`t so successful with dancing, as the place we went to did not have a nice vibe to it. It was a nice venue and the music was good (the DJ was a friend of a friend) but the bar staff were rude, shockingly so by Japanese standards, and everyone there just seemed unfriendly. I don`t think it had anything to do with us being foreign, I think it was just that we weren`t regulars, or maybe we weren`t the type of people who normally went there. Who knows. Anyway, despite some tears, anger and drama, we ended up going to a cool little hole-in-the wall bar before we taxied it back to our hostel.

My favourite part of the trip was the aquarium though, as it was all sealife from the Pacific, most of which I had never seen before. It was a massive building with a huge central tank, circled by a corridor and smaller tanks. I couldn`t help but be reminded of the acquarium in Salthill, Galway (having just looked it up I`ve discovered it is the National Acquarium of Ireland), which, despite its comparatively limited range of species and ecosystems native to Ireland, I really enjoyed when I visited it several years ago. I remember the pike looking very ominous in its canal-style tank, and I remember being able to hold starfish in the touch pool. The Osaka aquarium was obviously much more impressive (although it lacked the charm of Salthill), with exhibits from all around the Pacific Ocean, from Japan to South America and everything in between. 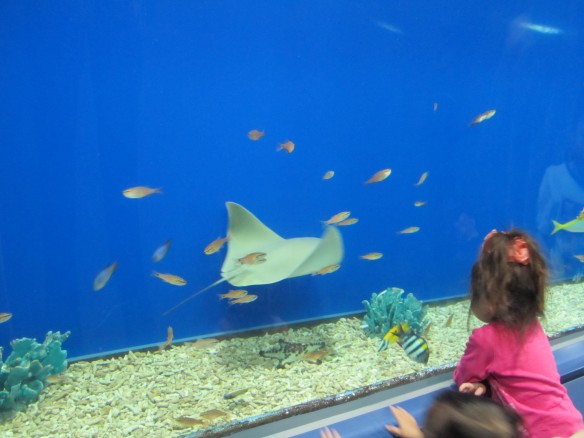 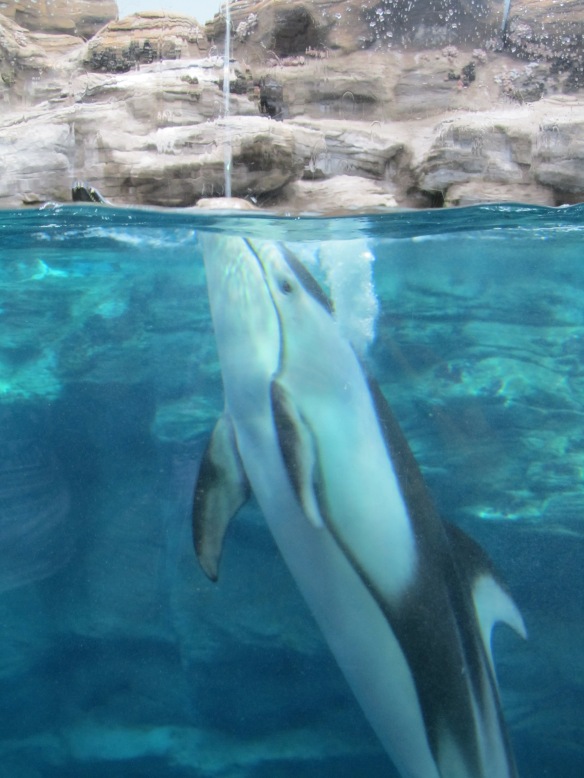 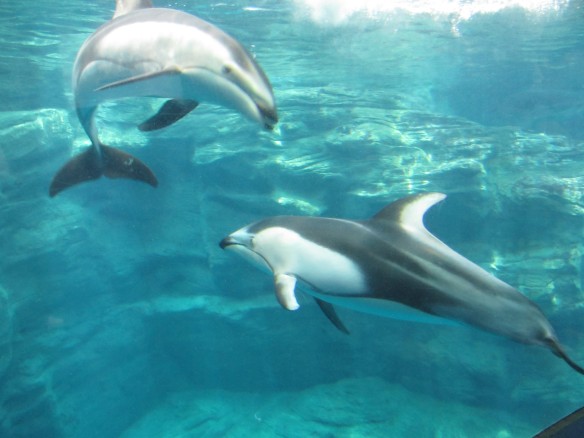 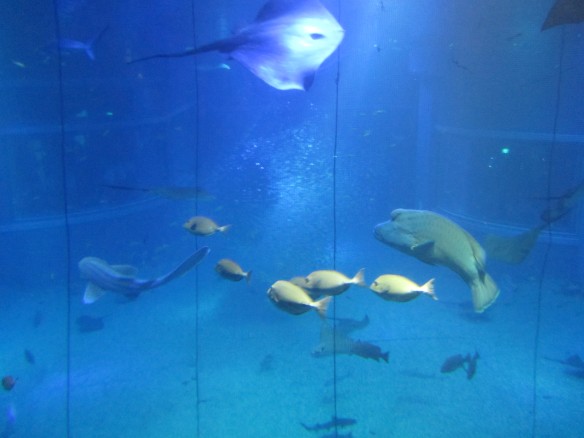 This is the great central tank. Unfortunately the star attraction, the massive whale shark, was missing during our visit. We went through the whole acquarium, thinking they were saving him ’til last until we arrived at the exit and asked a member of staff about it. We didn`t understand the answer but we knew that it wasn`t there. I was worried that we had somehow walked right by the biggest sea creature in the acquarium without noticing it! I found out later that it had been moved somewhere else for a while because it didn`t get on with one of the other fish in the tank, whether for environmental or personal reasons, I don`t know. 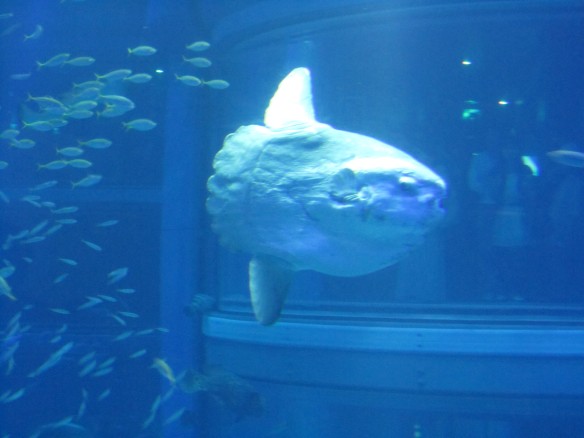 This is the weirdest-looking fish I`ve ever seen. It looks like it had been chopped in half and regrown from the stump. 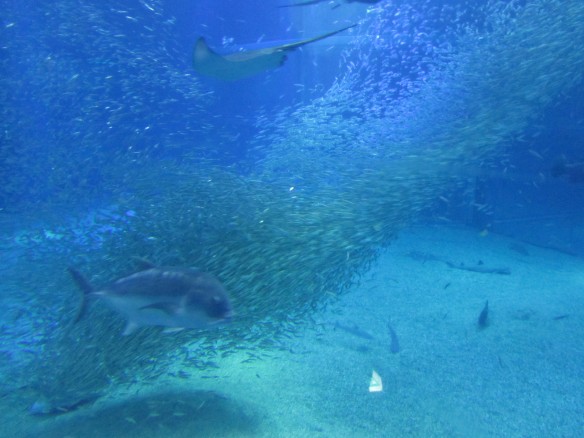 I was mesmerised by the shoal of silver fish who danced in the middle of the tank, gracefully parting and uniting to allow the other fish to pass through. 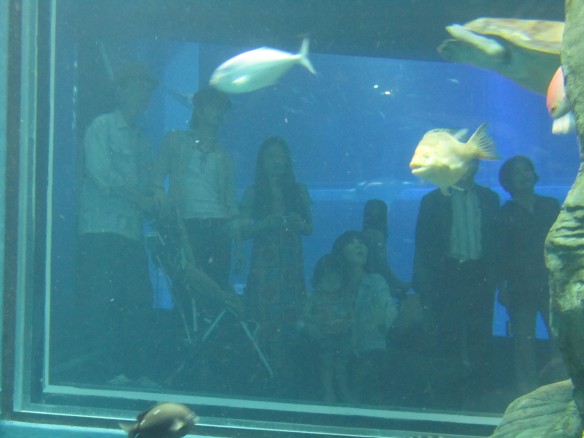 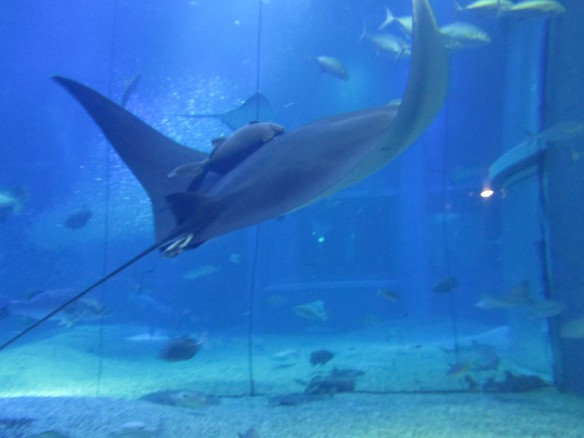 Some cheeky fish hitched a free ride with the manta ray. 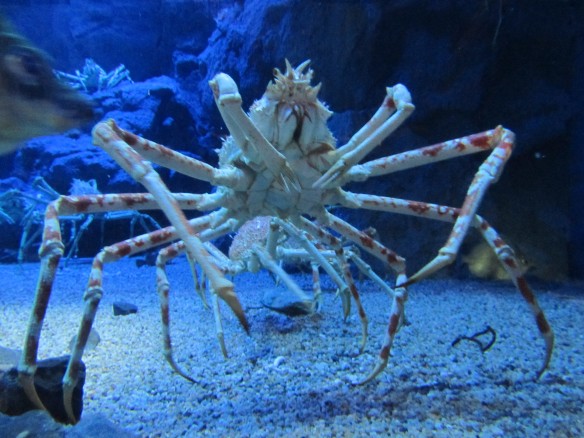 Spider crabs – Ishikawa is famous for these. It`s the first time I`ve seen one not half-dead, twitching on ice in a fish market. 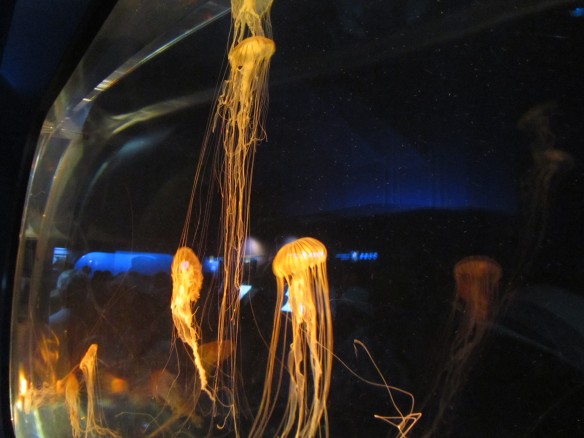 The jellyfish were spectacular, they were my favourite part. It was like watching an animate lava lamp. 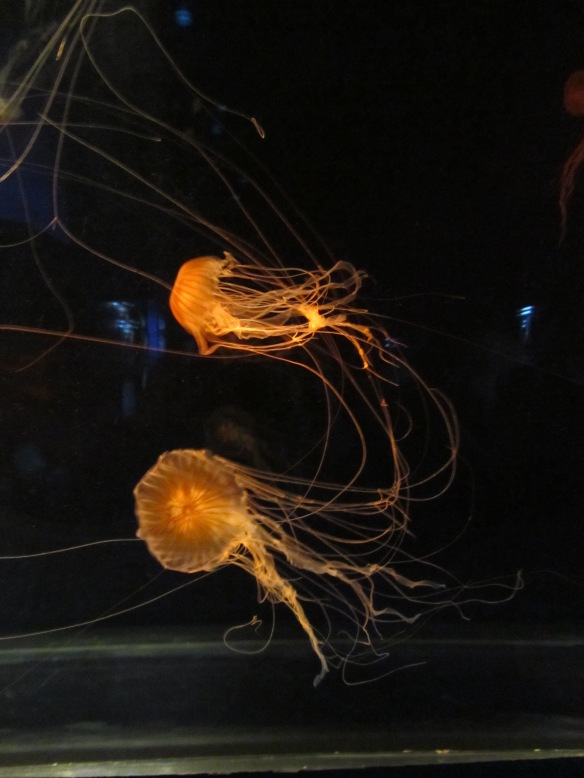 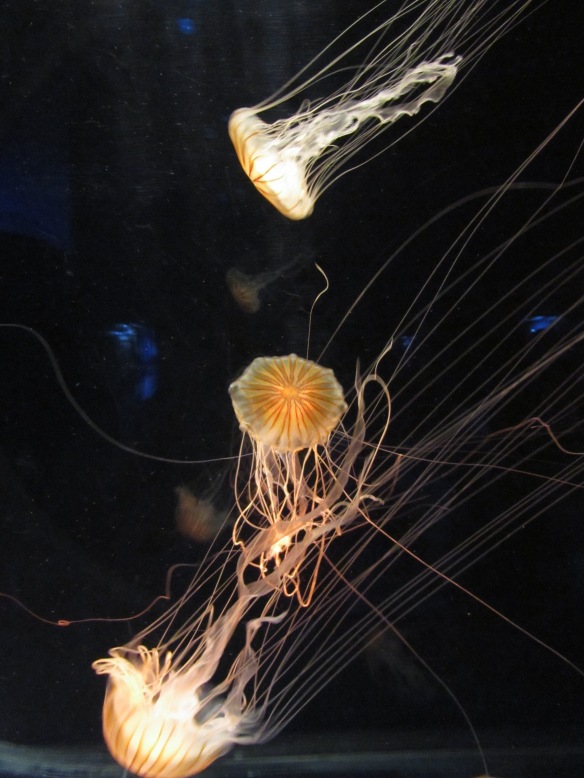 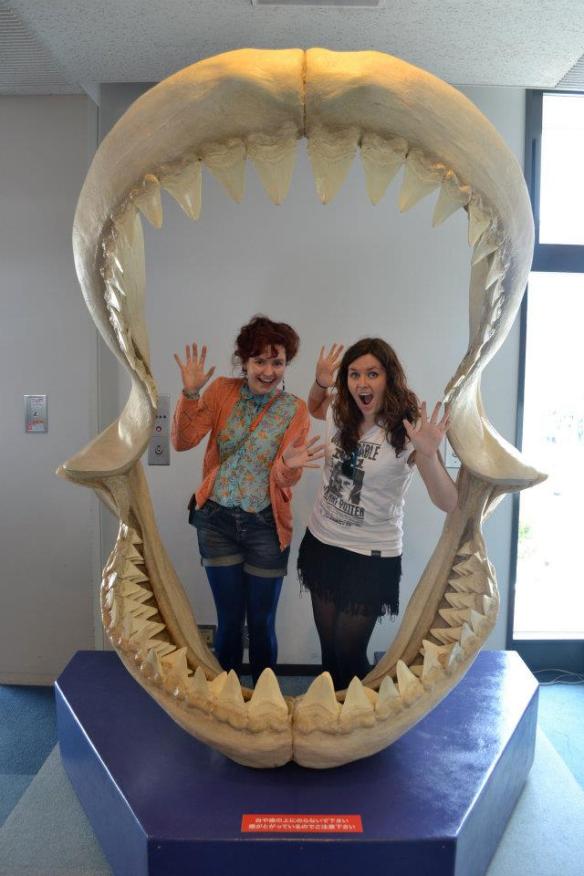 No trip would be complete without a tourist pose picture! 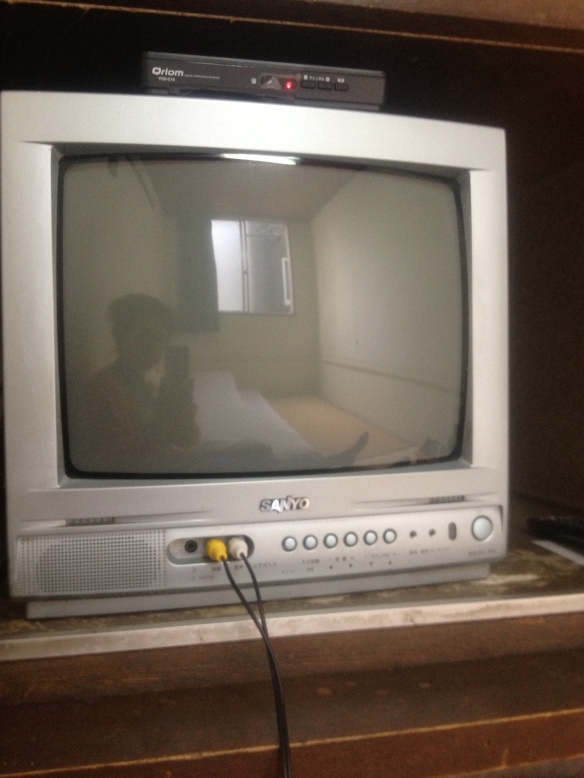 My hostel room; spartan but surprisingly comfortable. It would be unbearable in summer without airconditioning though. 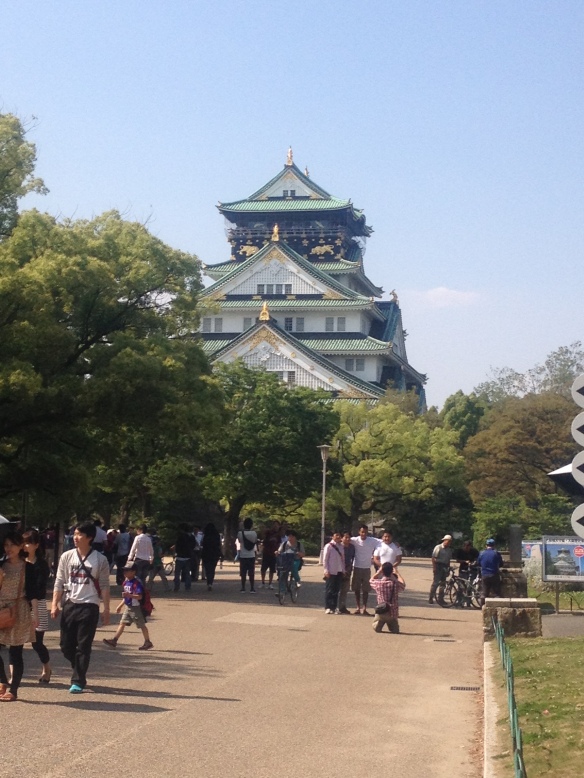 When I was in Kyoto, Laura told me that some of her friends were going to a concert in a forest on the Saturday if I was interested. I didn`t really know what it was going to be like and neither did she, but we were intrigued by the sound of it, so we decided to go. We weren`t really sure where it was, how we would get there or how we would get back, but we packed our bags with onigiri, suncream and jumpers in preparation for the adventure. We met with her international friends from university who did have a better idea of what was going on and we got a train out of the city for about an hour to the mountains to the north-west of Kyoto. We arrived at a station in the middle of nowhere along with other obviously dressed festival goers, who seemed a lot more prepared than us with rucksacks full of tents and other camping equipment. We had known beforehand that you could camp at the festival, but none of us had any equipment, so we decided to party on through the night and get a train back in the early hours of the morning. In fact, the festival began at 2 o`clock on the Saturday afternoon and continued until noon on Sunday, so we were sure that there would be plenty of others doing the same as us. 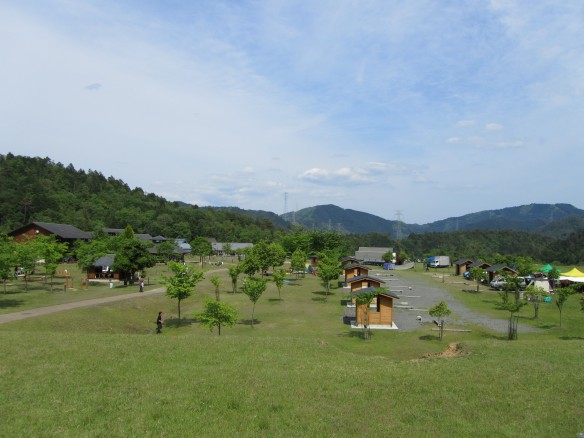 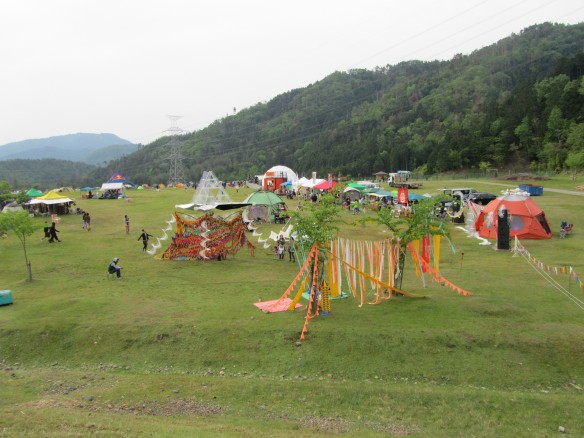 A short shuttle-bus ride brought us even higher into the mountains. We arrived at a campsite that had been taken over for the festival. It was so laid-back, there were no sour-looking security personnel telling people where to go and what to do. There was no defined area for camping, but everyone set up their tents together in an orderly fashion, there were real campsite toilets which remained decent throughout the duration of the festival, there was an area of stalls selling Japanese festival food and then there was the stage area. It took me a while to find the stages because they were both quite small, but they didn`t need to be big because there were no bands, only djs. I hadn`t heard of any of them but apparently there were a few big names from the dance scene there. The music was all kinds of dance – electro, techno, trance, house and all those genres that I can`t tell the difference between, and a bit of dubstep and drum`n`bass. 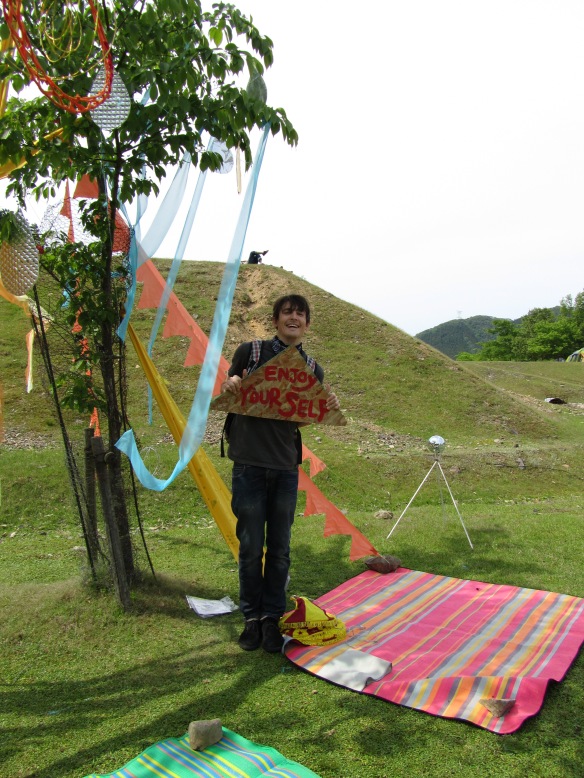 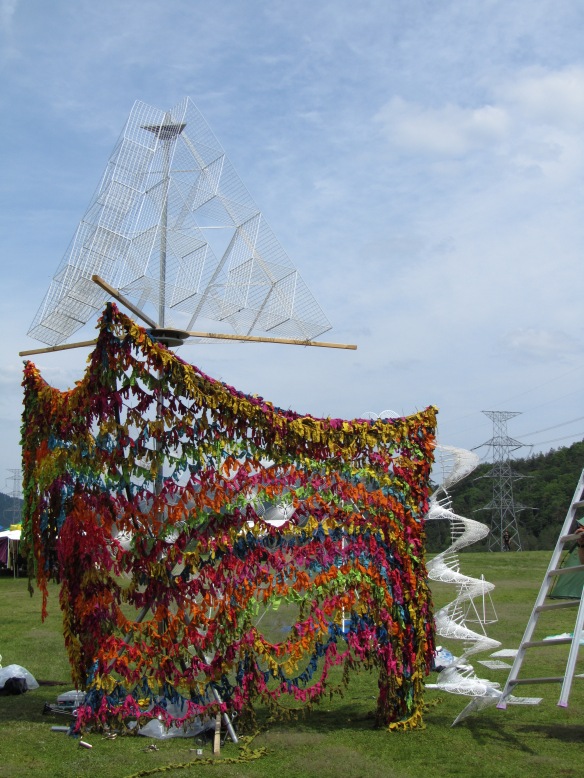 We arrived early in the afternoon, when the festival had just opened, some of the stalls were still opening up and there weren`t many people around yet. It felt like what I imagine Electric Picnic to be like (on a tiny scale), with arty chill-out places and random sculptures around the place. It was a beautiful day to be up in the mountains so we set up our blanket on top of a grassy knoll that looked down onto the rest of the festival so we could see people coming and going while we had a picnic. The knoll had a large balloon that was tethered above it, so we played musical picnics as we followed its shadow around. There was a really nice vibe, everyone there seemed relaxed and friendly, and there were quite a few other foreigners there too, I assume other exchange students from Kyoto. 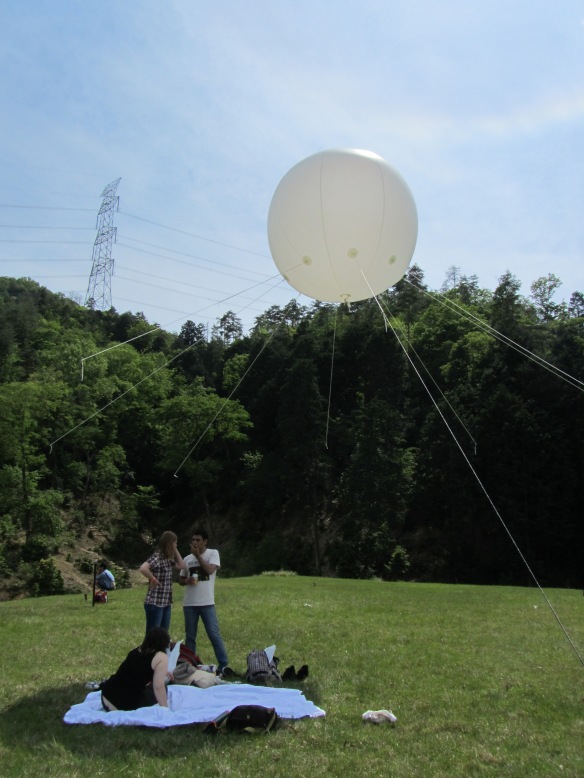 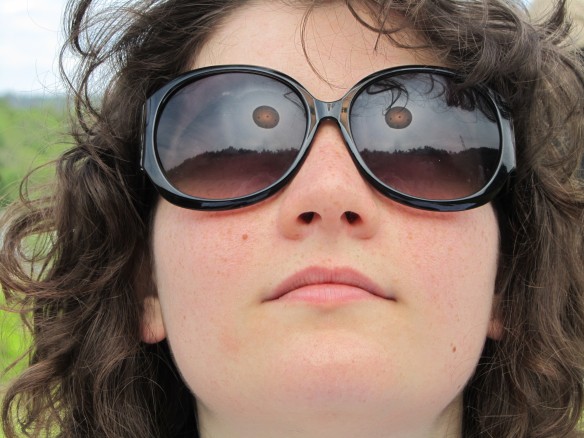 While we were atop the hill, I looked over at another group of foreigners and I saw my friend Miriam who lives just south of Kanazawa. She`s hard to miss with her trademark lipstick cheek warpaint and when I went over to her I realised that half the JETs of Ishikawa were there with her! Apparently I too had been told about this festival ages ago on Facebook but I never noticed, and they had all driven down that day and were camping the night. It was such a lovely surprise to meet everyone there. We united with Laura`s friends and made many more Japanese friends as the night progressed. 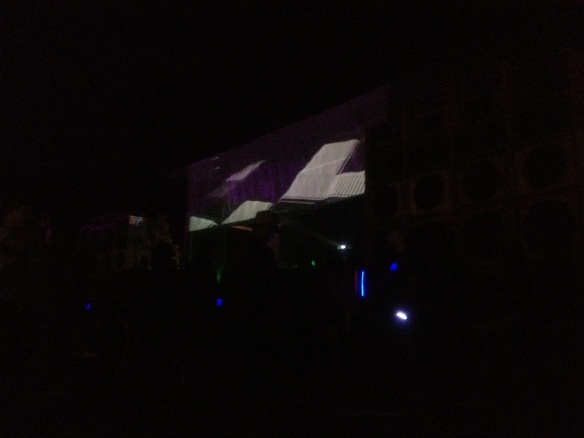 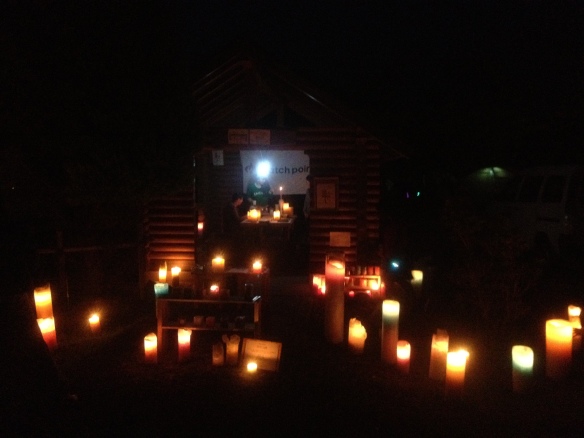 My plan of doing an all-nighter fell through when Laura and I fell asleep in a tent around 2 o`clock, but I did wake up at 6 o`clock the next morning feeling refreshed and ready to rejoin the party that was still going on. After a few hours boogying in the morning light, we said goodbye to my friends and we went back to Kyoto so I could pick up my stuff and get the train home. I had a great time and I`ll definitely be going back next year. 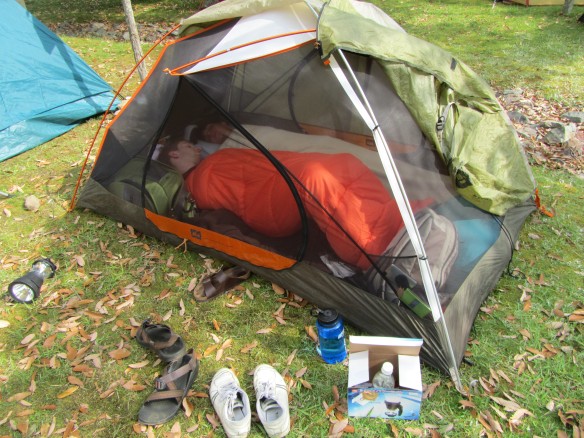 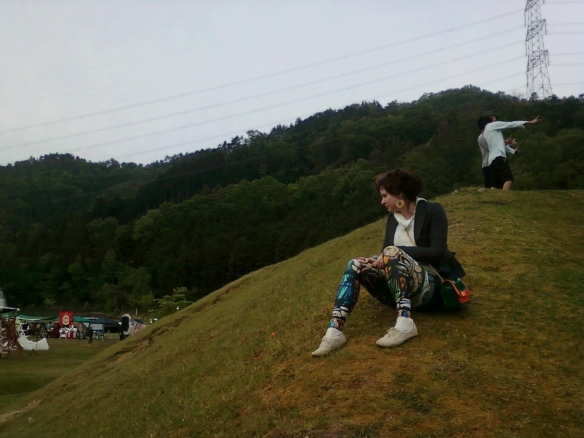 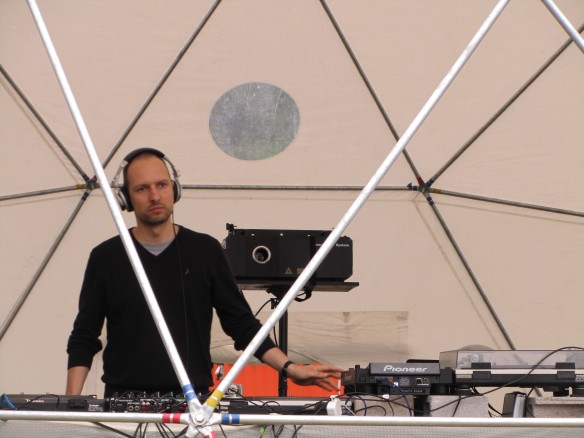 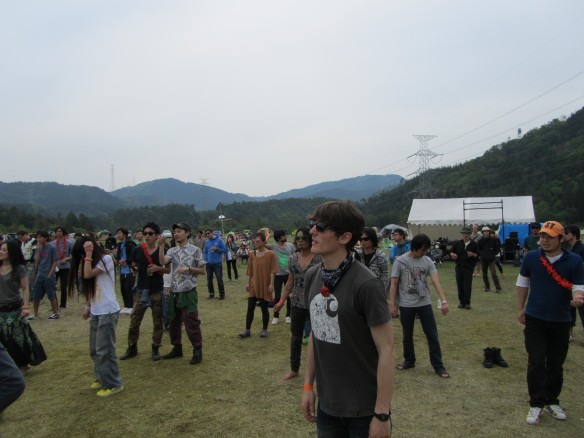 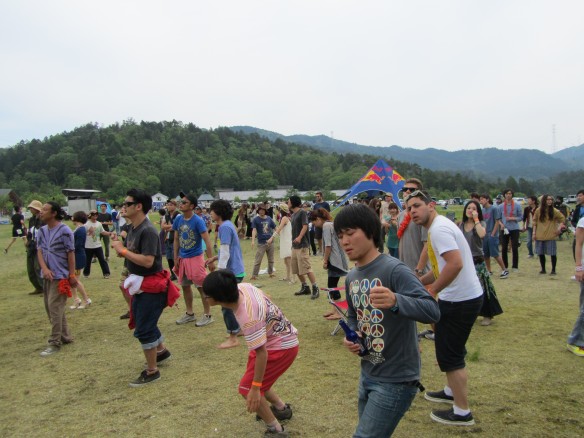