The cherry blossoms have come and gone and so has the season for viewing them, known as hanami. There are still some of the fat pink variety lingering on amidst the leafy regrowth on the trees, but apparently it doesn`t count as hanami once there are leaves, according to one of my co-workers. It’s part of the traditional Japanese love of looking at and appreciating nature. It’s also a good excuse for an outdoor party. Above you can see some Edo-period woodblock prints of cherry blossom viewers. The cherry blossoms herald the start of Spring and warmer weather, and the Japanese weather forecast charts the cherry blossom ‘front’ as it travels up Japan beginning in Okinawa, where it can start as early as January, through Honshu where the season is typically in April, until it reaches Hokkaido in May. It seems strange that cherry blossoms are such a big thing here, more than anywhere else in the world. There was an avenue of blossom trees near my house in Ireland but you`d never go there just to look at them. I was so glad to see the blossoms here though, as it meant winter was definitely over. I`d heard that this winter wasn`t so bad in my region in terms of snowfall, but it was still snowing up until March so it was a relief to get a sign that it was over.

My family came to visit me during their Easter Holidays for two weeks at the beginning of April, which really is a great time to visit Japan. Winter`s too cold and Summer`s too hot, and while Spring is chilly, it`s good weather for sight-seeing. Rather than go into minute detail of what we did, I`ll track our journey in terms of cherry blossom. 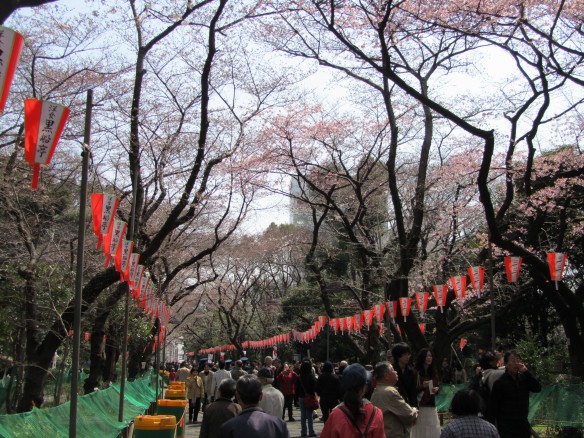 My family flew into Narita airport so I met them in Tokyo. We stayed in Ueno, the area where I stayed at New Year, which I love for its mixture of high-brow museums and low-brow markets. Ueno Park is also one of the most popular spots for hanami in Tokyo. The cherry blossoms were just starting to open so it was relatively quiet, but they had lanterns up around the place and festival food stalls so my family were able to try yakisoba (fried noodles), takoyaki (octopus dumplings), okonomiyaki (Japanese pancakes) and yakiniku (meat on a stick).

Another favoured Tokyo hanami spot is Shinjuku Gyoen, which tends to be quieter because you have to pay in and you`re not allowed bring in alcohol. It was a dull windy morning when we went there, praying that it wouldn`t rain, which it didn`t. We breakfasted under a gnarled old tree that had round seeds hanging from it like Christmas baubles. I don`t know what it was, but I liked the contrast between it and the delicate flowers on the trees next to it.

There are three styles of garden in the park; an English landscape garden, a formal French garden and a traditional Japanese garden. We only looked around the Japanese garden because, as my mother put it, they “didn`t travel to the other side of the world to go to an English garden”. The Japanese garden was beautiful, with trees, ponds and bridges. My sisters were reminded of Disney`s Mulan (China/Japan, close enough) and we passed most of the time quoting the film and singing the songs to ourselves. 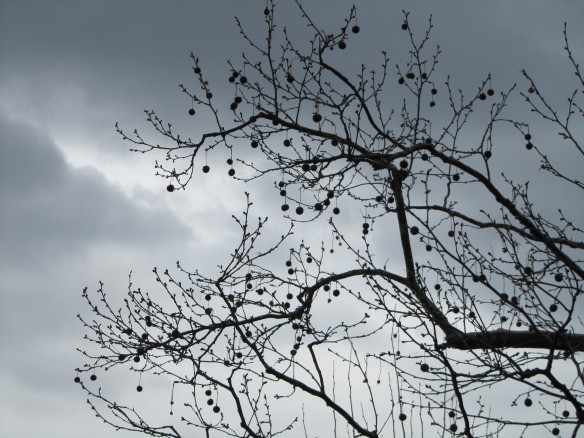 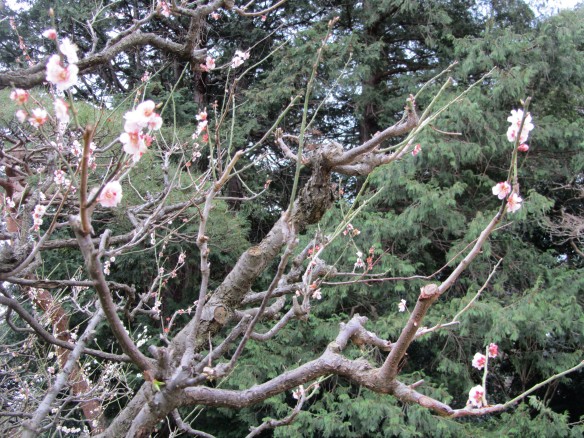 Most of the blossom trees were still just starting to sprout pale, fragile blossoms from their truncated and seemingly withered limbs, but the magnolia was in full bloom. They`re not so common in Ireland I think, but I remember one house in my town had a tree and I loved walking past it when it was in bloom. My friend says that it`s important to know your favourite things because it`s easy to forget unless you`re reminded of it, so I`ve decided that the magnolia is one of my favourite flowers. They are magnificent in full bloom. Did you know that the magnolia tree was around before the evolution of bees? The petals are so tough in order to avoid damage by the beetles that assist in pollination.

The next stop on our Japan travels was Kyoto. On our first night we went to Maruyama Park as the sun was setting. There was a light-up that night, the centrepiece of which was the weeping cherry tree in the middle. This is the most popular spot in Kyoto for hanami parties, and you enter it through Yasaka Shrine. Crowds of young university students and office workers went through to the park where they had scouts already staking out a place on the blue plastic mats underneath the cherry trees. The blossoms were still in their early stages but people were celebrating with full-blown gusto. The weather was clear and cold and the temperature dropped sharply when the sun went down, but that didn`t stop the revelers from having a good time, most of whom were wearing their beer jackets, although one smart guy came prepared with a sleeping bag. 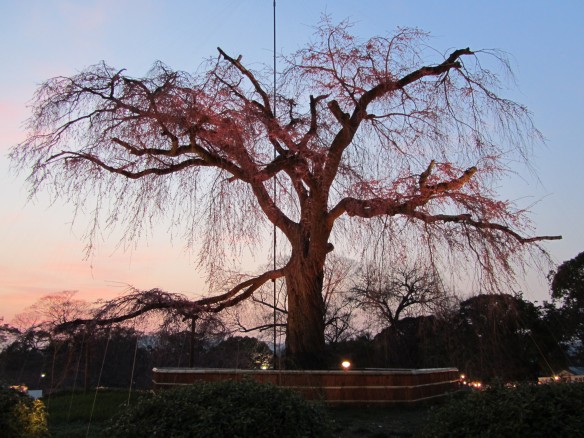 After our brief stop at Kyoto we went further south to Hiroshima, where the blossoms were blooming nicely. Unlike Tokyo and Kyoto where the blossoms were pink, they seemed to be mainly white in Hiroshima. The riverside area around the A-Dome and the Memorial Park are so beautiful that you feel guilty appreciating the blossoms instead of contemplating one of the most horrific events in recent history. We wondered what it must be like to live in Hiroshima and walk by this place regularly. Does it lose its significance for them? Is the dichotomy of horror and beauty something you get used to? 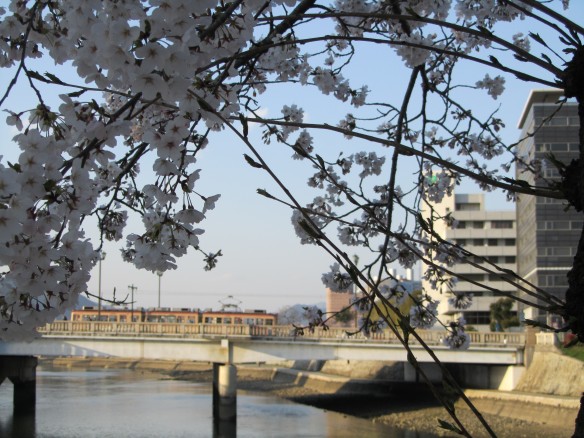 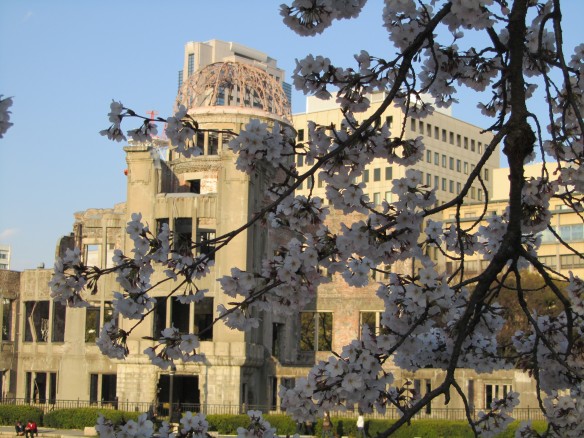 We took a side trip out of Hiroshima to Miya-jima, an island shrine which is famous for its floating torii in the sea. These were the fullest blooms we saw on our trip because the front was slow in moving up through Japan this year; in fact the special opening of Kenrokuen park in Kanazawa for the cherry blossoms had to be put back by a week so my family missed them there. They are notoriously unpredictable. 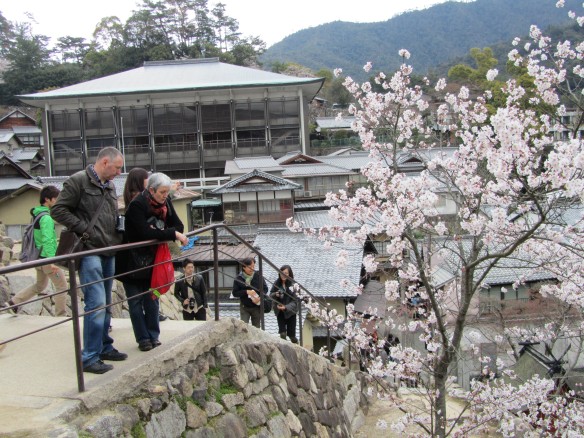 The blossoms bloomed in Kanazawa the week after my family left, and there was lots of hanami-ing by the rivers which are lined with cherry trees and blessed with wide grassy banks and lots of sun. However, the weather is so changeable at this time of year that I caught a cold and missed the light-up in Kenrokuen. Oh well, there`s always next year. 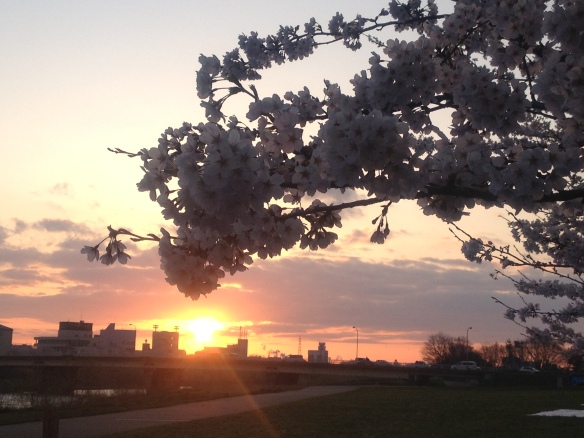 I took a trip back to Tokyo a week or two ago during Golden Week (more on that coming up) and stayed in Ueno again. Although the hanami season was over, there were still people appreciating the last blooms of the year.