Bear with me while I get winter out of my system. Even though Spring has definitely sprung and we’re in full cherry blossom season with gloriously warm days of sunshine, Winter is still hanging around ready to grab his chance and inflict colds upon unsuspecting people who think they can risk going out without a coat.

Skipping back to mid-February when we were still in the icy grip of winter, I took my first domestic flight ever (I think) and flew to Hokkaido which is the northernmost island in the Japanese archipelago and which is considered the back of beyond by a lot of Japanese, but whose capital city Sapporo has quite a happening scene.

The Sapporo Snow Festival started in 1950 when some high school students made snow statues in Odori Park in the centre of town. Since then, it has grown into the biggest winter festival in Japan, attracting over a million visitors during the week. There are three first-year Irish JETs living in Hokkaido, two of which are in Sapporo, so this was another opportunity to have a big Irish reunion, and take advantage of John’s hospitality and large apartment. I came for the last few days of the festival, and as I was the first of the weekend gang to arrive, I got in some culture with some other JETs who had been here for the week and leaving the next day.

We went to the Hokkaido Museum of Modern Art where there was an excellent exhibition giving an overview of European prints from Durer to Magritte and many in between. It showed different techniques for printmaking, such as Durer’s woodblocks, Rembrandt’s engravings, and Picasso’s lithographs. It was a lovely surprise to find such a good exhibition in a provincial museum. I also loved the kinetic sculptures outside the museum.

The weather was crystalline – the skies were clear, the snow was a fine powder and the sun was blindingly reflected off it. The footpaths that weren’t heated(!) were covered in an uneven but compact sheet of ice so I invested in a pair of foot claws to stop myself from doing half a back-flip onto my head, as I did the night before I went to Sapporo.

The next day as more people arrived for the weekend, John took us to his regular lunch spot, a burger joint run by a Japanese guy who had lived in America for a good while. The burgers were so good that we ate there everyday for brunch. I loved the kitsch Americana vibe to it. 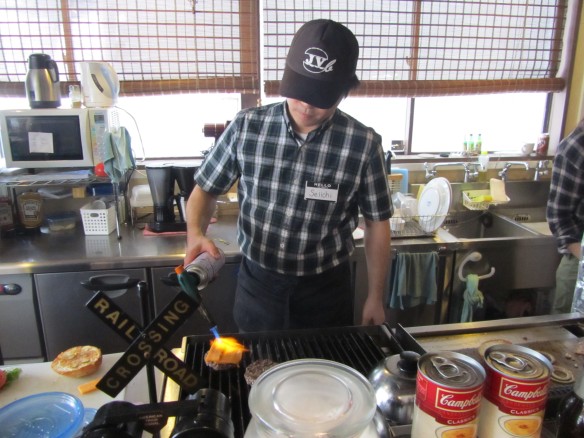 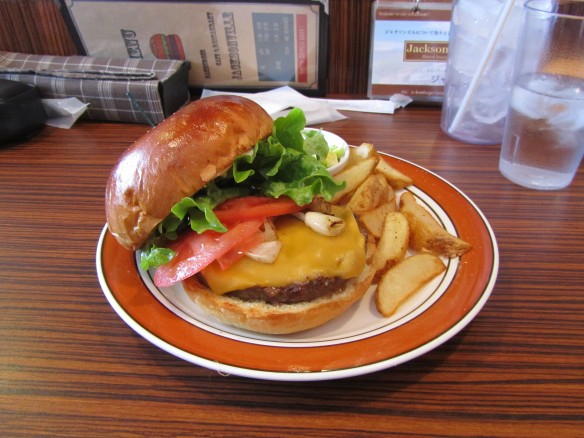 After brunch we took a trip outside the city to the snow-slides, but no sooner had we got off the bus than a blizzard sprang up and I though the wind was ripping the skin from my face. When we had recovered, we went back to the centre of town to see the snow sculptures. Luckily the city centre has quite an extensive network of underground passageways with shops and restaurants, so we could walk from the Station to the Odori where the sculptures were.

The sun was setting so the temperature was dropping fast, but we wanted to see the snow lit up. Earlier in the week there had been a brief warm spell so some of the sculptures had melted or collapsed but the remainder there were pretty impressive. There were gigantic works that were showpieces for the festival, and smaller ones carved out of cubes of snow that were judged in competition. 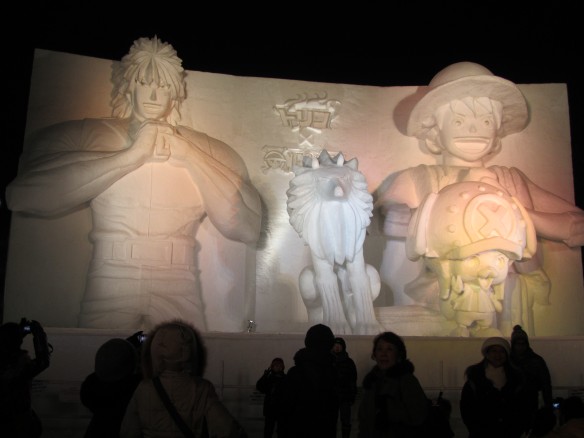 It was beautiful lit up, but so cold that we had to constantly duck into any kind of shelter that had a stove. 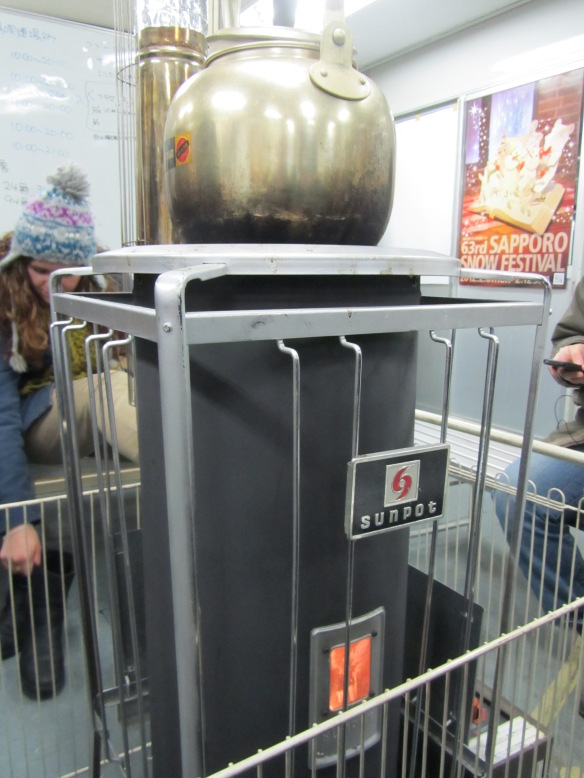 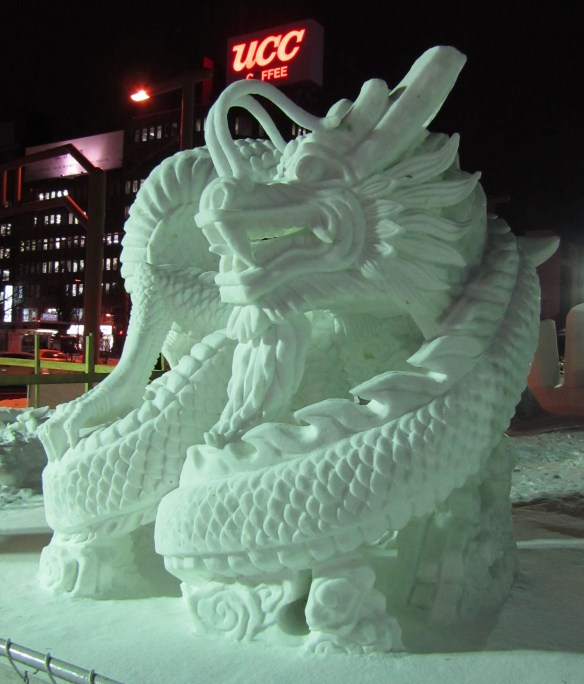 To finish off the day with another essential Sapporo experience, we went to the Sapporo Bier Garten to have a Genghis Khan dinner and lots of Sapporo (brand) beer. Genghis Khan is a lamb barbecue unique to Hokkaido where you get a rounded grill at the top of which you place a lump of fat and then cook the pieces of lamb in it, and dip in a special sauce. Lamb isn’t really eaten in the rest of Japan so it was a nice change. We ate it with corn on the cob and buttery potatoes, you can see John in the photo contemplating how to eat a potato with chopsticks, before he gave up and used his hands. It was a fun experience eating all this hearty food with paper bibs around our necks, in a large beer hall with rowdy Japanese people letting loose. 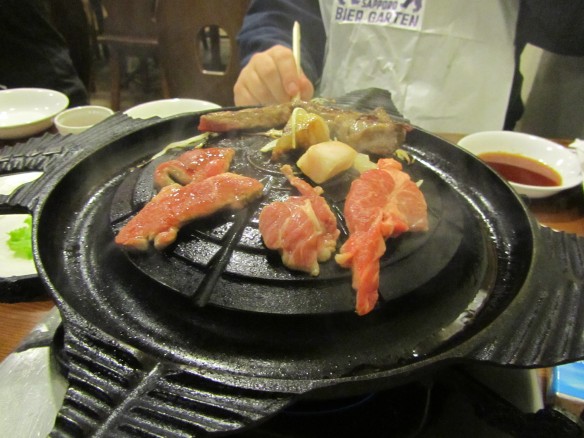 The next night we went to see the ice sculptures complete with an ice bar that served hot lemon sake that tasted just like lemsip which I love. After this we went out to a birthday celebration that ended at about 6 o’clock in the morning in an all-night soba noodle shop as we waited for the first metro back home.

An official spreading gravel on the icy paths. 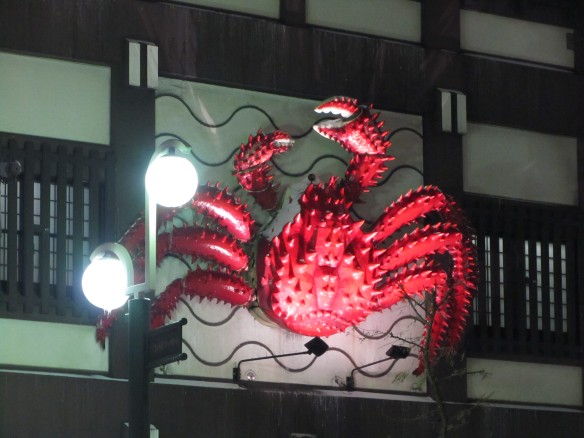 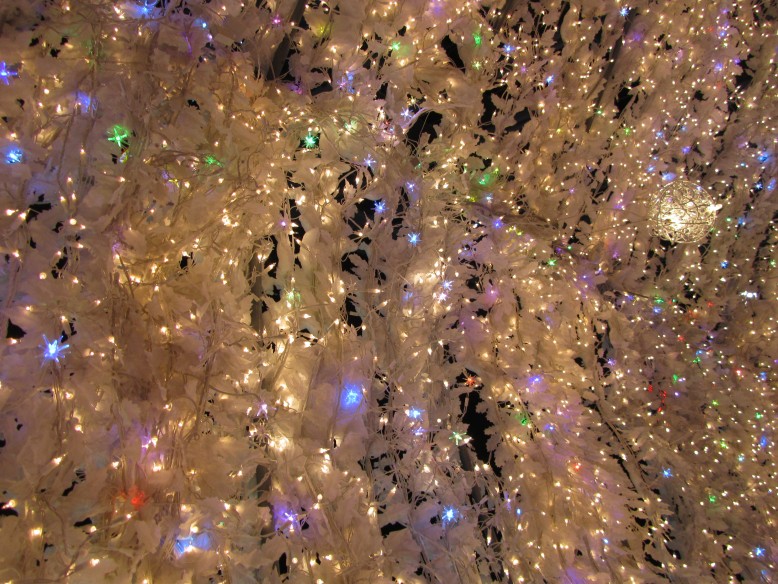 The next day my friend Catherine and I took a trip out of Sapporo to the mountains to go to an onsen (a hot spring resort). It was worth the effort and travel because the scenery on the way was stunning and it was a strange experience to bathe outdoors in sub-zero temperatures watching the snow fall on the mountains. We went back to Sapporo to dine on soup curry, a Sapporo specialty which doesn’t sound very appetising especially because it sounds like Japanese curry rice which is a very artificial, if filling, dish. I had never heard of it but soup curry had been recommended to Catherine as the best meal in Japan and it turned out to be no exaggeration. A spicy soup filled with meat and vegetables accompanied by cheese-topped rice, doesn’t quite do it justice as a description but it was absolutely delicious. 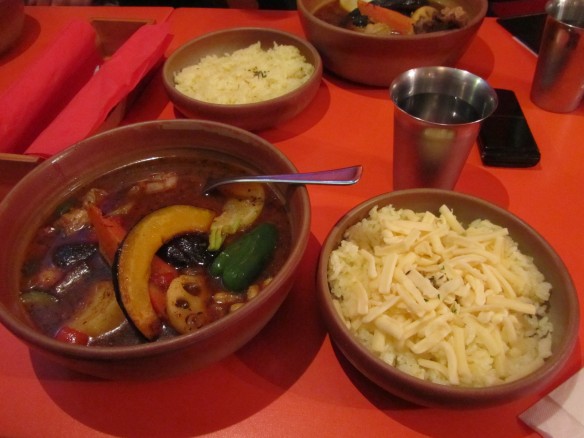