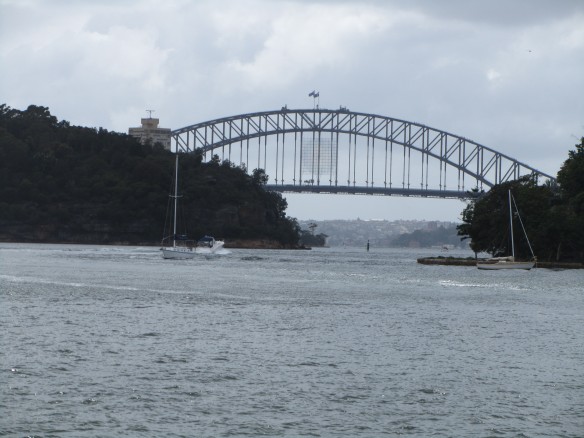 Sydney is full of ways for tourists to pay to see the city, but a pleasant and inexpensive way is by taking a ferry ride.  There are many different routes, some just for tourists like the ferry to Taronga and some are for transport, and although the ferry is a lot slower than the train to get from the suburbs to the centre, it is very picturesque.  It was a cloudy morning when we took the ferry down Parramatta River.  It`s far enough to travel to the centre, and the view went from countryside vegetation to expensive villas set along the coast and finally to expansive views of Sydney Harbour and its major landmarks.  It`s quite something to sail beneath the Harbour Bridge and come to berth by the Opera House.  As we were coming under the Bridge we could see people climbing it. 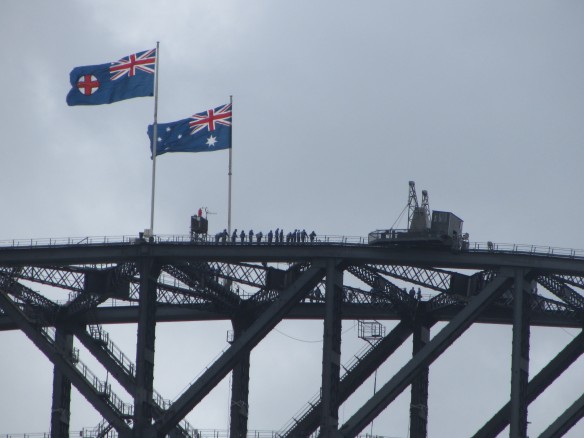 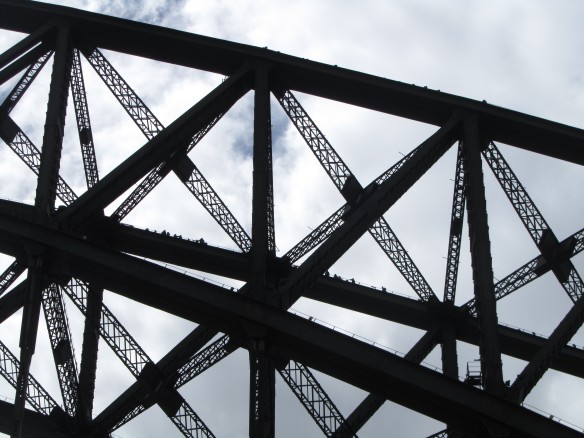 The Sydney Harbour Bridge Climb was a little out of my budget, but my holiday wasn`t without a spectacular birds-eye view of the city, as for Christmas Catriona gave Damien and me tickets to do the Sky Walk on Sydney Tower. Sydney Tower is perched on top of a Westfields shopping centre in the middle of Sydney, and has the distinction of being the second tallest free-standing structure in Australia, and the second tallest observational tower in the Southern Hemisphere. Despite its relegation to second place outside of Sydney, it has the highest vantage point in Sydney, and at 268m, the outdoor viewing platform is exactly twice the height of the Harbour Bridge.

We were the only people with VIP tickets which was embarassing at the beginning because we were skipped to the front of people queuing. Our visit began with a 4D cinema experience which had gimmicks such as a bubbles and a vibrating floor, but despite that it was cool to see a 3D view of Sydney from different perspectives. From the top floor of Westfields we took a narrow elevator up the stem of the tower, the speed of which made our ears pop a few times. We got out at the tower eye where most people look out through the glass windows at the 360 degree view of Sydney, but our real experience was just starting. Our blood alcohol levels were tested with a breathaliser and we were given blue overalls and harnesses. Along with about six other people, we went into the core of the tower and linked ourselves to a metal rail that went along the inner wall, up the stairs to the outdoor walkway and around the water tank.

We walked around in single file dragging our leashes behind us while our guide pointed out notable landmarks around us. There were two narrow glass-floored platforms which extended from the walkway at the push of a button, and our guide assured us of their safety by having us jump up and down in unison. I have no fear of heights above a certain level because everything looks unreal when it`s so far below you. I would feel more acrophobic if I were standing on a ladder a couple of meters off the ground. I wonder if I would ever have the guts to do skydiving or bungee jumping, because while the reality of freefalling hundreds of meters is terrifying, there is something about being at that height that triggers my lemming impulse and makes me want to climb railings and jump off like in a dream.

Like in almost all Sydney tourist attractions, the guide took our photos against the backdrop of the city but we didn`t bother buying them and I took pictures from the Tower Eye below. It was an amazing experience to be that high up in the city and see the skyscrapers below and feel the wind that moves the clouds. I could see Botany Bay where the airport is to the south, the harbour widening into the Pacific in the east and even the faint haze of the Blue Mountains in the west. 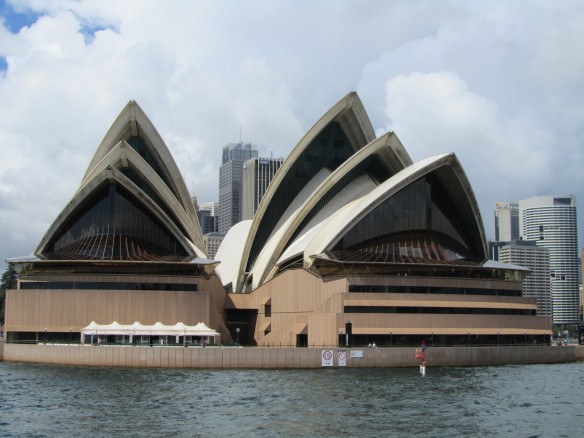 It’s impossible to take too many photographs of the Opera House. It changes shape from every angle and changes colour and tone with every shift in weather or time of day. It’s possibly the most sculptural piece of architecture in the world. It is the symbol of Sydney, and its design is said to reflect its waterside situation as representing the sails of a ship, or as a symbolic representation of a shell. It is an amazing building. A tour was a priority on my holiday itinerary, and our tour guide was a very knowledgeable man who had been working there for 18 years. He told us about the architecture, the history and the music of the building.

The story of the construction of the Opera House is a controversial and sad one.
In 1956 the government of New South Wales opened an international competition to design two performance halls, one for opera, the other for the orchestra. Jørn Utzon’s entry was reputedly reclaimed from a pile of discarded designs by the Finnish architect Eero Saarinen.

“The drawings submitted for this scheme are simple to the point of being diagrammatic. Nevertheless, as we have returned again and again to the study of these drawings, we are convinced that they present a concept of an Opera House which is capable of becoming one of the great buildings of the world.”
Assessors Report, 1957

Utzon`s design was a drawing with no specifications, and just like the builders of the Duomo in Florence, the architect did not know how he was going to construct the shell vaults. That didn`t stop the start of work on the site though. Working with the engineering firm of Ove Arup and Partners, Utzon went through countless designs to work out a realistic construction method for the shells. They were originally conceived as parabolas supported by precast concrete ribs, and while this wouldn`t have been structurally impossible, the cost involved would have made it prohibitively expensive. Two years after the beginning of work on the Opera House, they came up with a solution worthy of Brunelleschi. The shells were designed as sections of a sphere, allowing arches of varying length to be precast in a common mould (reducing the expense of casting individual forms) and allowing a number of arch segments of common length to be placed adjacent to one another, to form a spherical section.

In 1966, due to conflicts with an uncooperative government who witheld his fees, Utzon resigned. The designs for the interior were changed and finished by a different team of architects.
In 1973, the Opera House was completed at a total cost of $102 million, ten years late and overbudget by fourteen times. It was formally opened by Elizabeth II and Utzon was not invited nor was his name mentioned. Despite a reconcilliation between Utzon and the Sydney Opera House Trust in the late 1990s, Utzon never returned to Australia to see the finished building.

A cathedral to the arts 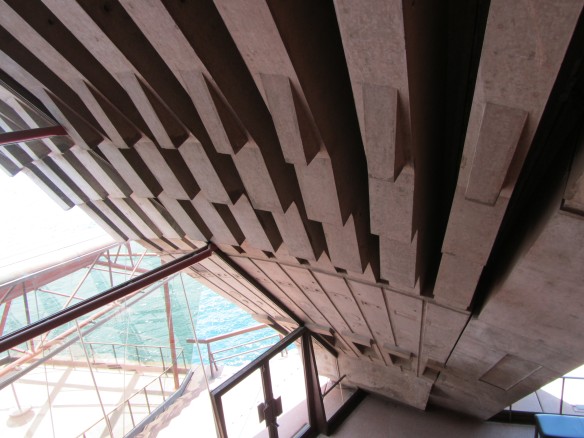 Note the Harbour Bridge seen through the window. 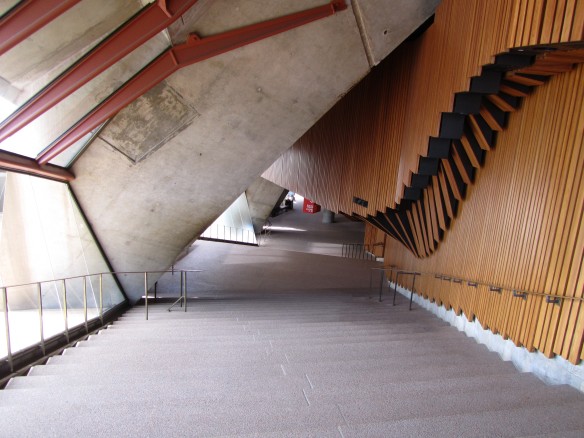 The complex is made up of three parts – a smaller shell in front for the restaurant, and two larger ones side by side. The main hall is used for orchestra and large concerts and has seats on all sides surrounding the stage. The smaller hall is used for the opera and all the seats face the front of the stage. Our tour guide told us that an interior extension of the opera stage is planned because it is simply too small for the sets of operas travelling with companies like The Met that are meant for much larger spaces. One of the members of our group asked him why the opera wasn`t staged in the main hall since the building is named after it. It came down to politics, explained our guide, as when the Opera House was opening, the orchestra had a stronger say with the people in charge so they got into the main hall and the opera was relegated to the smaller stage. I would have liked to see an opera or a concert but I was there just before the new season started so thre wasn’t anything very good on.

I had imagined the exterior of the Opera House to be a gleaming white smooth concrete surface and I often wondered how it was kept so clean, but it is actually covered in a mosaic of glazed white and off-white tiles.

The Utzon Room: the only interior to have been designed by Utzon and hung with a tapestry by him.